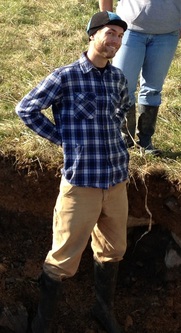 Abstract Red spruce stands in West Virginia are important for a multitude of reasons including habitat for Cheat Mountain Salamanders and Northern Flying Squirrels, timber production, recreational aesthetics, and carbon sequestration for global warming mitigation. Current and past documentation of organic O-horizon surface layers up to a meter thick in well developed spruce stands shows that these systems can tie up a lot of carbon. These soils also collect carbon in subsurface spodic horizons (Bh or Bhs horizons) where carbon is moved lower in the soil through a leached zone and then deposited usually anywhere from 20 cm all the way down to meters deep depending on the amount of horizon development (example on left). This potential for the combination of surface and subsurface carbon storage offers a lot of potential for sequestration efforts in areas that lost spruce historically. We suspect many of these sites may have lost the carbon rich parts of spodic horizons, and thus restoring spruce could potentially reform these horizons and pull carbon back out of the atmosphere. Spodosol soils, even when they lose much of their organic matter can still leave a signature of easily observable Aluminum and Iron sesquioxides in the subsurface that can be used to trace where former spruce communities might have existed. We use both current organic matter distribution and other spodic properties to try and trace historic environmental extents of spruce populations for comparisons with estimates in ecology literature in southern Randolph and northern Pocahontas Counties, WV. 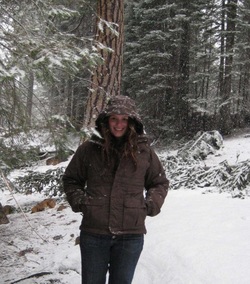 Abstract A small part of my research in forest disturbances deals with combining tree-ring chronologies from trees in the western U.S. to create a gridded network of chronology data. For my project, I will am using Principle Components Analysis (PCA) for data reduction from multiple sites into grid centroids. I am using R as a tool for generating tree-ring growth graphs for the combined chronologies as a way to compare the various climate regions in the western U.S. 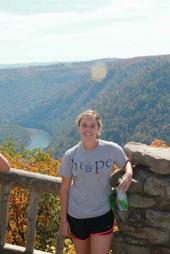 Abstract: Historically, the Appalachian coal industry has been very successful in developing technologies to identify, handle, treat and isolate potentially acid-forming overburden materials at coal mines in the region. However, the techniques used to predict acid mine drainage potential do not adequately predict the release of total dissolved solids (TDS).  As part of a larger project with a goal of developing methods to predict TDS release from overburden materials in the Appalachian region, our preliminary objective was to determine the effect of particle size on constituent release. Results showed that in general, the two particle sizes used in this weathering experiment are not significantly different from each other. 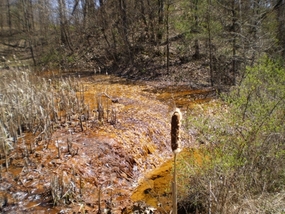 Abstract: Flow and geochemical data was collected at five different flumes at a mine spoil aquifer in Upshur County, WV. The flow data was collected at a frequency of one measurement every hour while geochemical sampling occurred on a monthly basis. The spline function in R will be used to create a continuous curve of geochemical data. This curve will then be resampled at a higher frequency to facilitate the determination of daily acidity loads discharging from the aquifer. The overall trends of the resulting time series can then be used determine the response in acid loadings to remediation efforts, as well as seasonal variations in cation and acid flux. 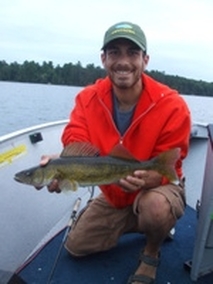 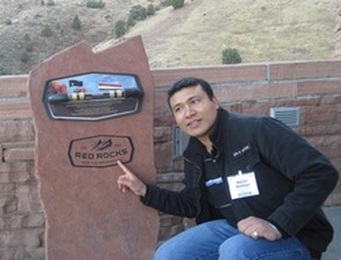 Abstract The data for this class project was taken from my Master's Degree research. The research was focused on mapping hydraulic conductivity to test the feasibility of locating transmissive bedrock fractured zones under the blanket of glacial till and define their spatial trends (if any) using available pumping test data from Well Logs and Drilling Reports of private residential water wells, and further analyze the origin of the fractures in relation to geological history of the area. For this class project, the data were separated into two groups: 1) dependent and 2) independent. The independent group consisted of parameters like elevation, depth of water table, potentiometric surface, glacial thickness, well depth, aquifer thickness, aquifer type, casing length, discharge, time, drawdown, well function, storativity and dependent group consisted of transmissivity and hydraulic conductivity. The main purposes of this class project were to identify the inter-correlation between two groups with various combinations of independent variables to hydraulic conductivity if exists and later to see their spatial distribution. 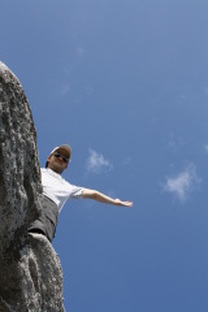 Abstract Mountaintop removal mining (MTR) represents the largest land cover/landuse change in the Central Appalachian region. In spite of the scale and extent of MTR, its hydrologic impacts are poorly understood. Several devastating floods in the region have been attributed to MTR, but there is little evidence to either confirm or refute this belief. Existing research has examined surface mining impacts on headwater catchments, but has only utilized statistical analysis of catchment outlet responses. Therefore, results from these studies only offer evidence of differences in hydrologic behavior, not process understanding of how the system is changing.  This study begins to address that research gap by exploring catchment outlet responses to precipitation inputs and ifferences in hydrologic response times, a fundamental hydraulic parameter that controls the conversion of rainfall to runoff.  Statistical comparisons between outlet responses such as total discharge, peak discharge, and runoff to precipitation ratios were made using multiple nonparametric tests for 24 storm events. A simple rainfall-runoff model was used to quantify differences in response times for storm events in a mined and predominantly forested headwater catchment. Results showed that the mountaintop mined catchment responded more severely (i.e. greater total and peak runoff) and more rapidly (i.e. shorter event response times) to storm events than the forested catchment. This study will also look at sensitivity to uncertainty in the rating curve that converts stage readings to discharge in each catchment 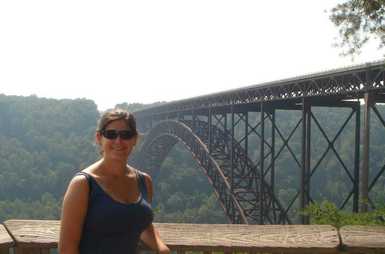 Abstract: West Virginia’s 303(d) list continues to grow at a rapid rate, because streams that are added to the list are rarely recovered to a level to warrant delisting.Combining methods based upon bioassessments and social perceptions may provide a promising way to involve local residents in conservation strategies aimed to educate, improve, and restore rivers and streams within the state. A web-based user perception survey was conducted between the months of May and September, 2012 using a snowball sampling technique targeting watershed organizations and water recreation outfitters as initial contacts. Our research objectives were to identify relationships between recreational user perceptions and biological condition through the use of fishes, examine if perceptions are spatially different across watersheds, determine if perceptions affect participation in water-based recreation and conclude if perceptions can assist with priority setting of impaired waters. Fishery data from 2000-2010 is used from twelve HUC8 watersheds as bioindicators of water quality condition. Little evidence from recent literature exists that supports water quality perceptions reflecting scientific bioassessments accurately. Perceptions can affect how our water resources are managed, having the potential to influence economic valuation and the utility of our ecosystem services. Identifying user perceptions could help strategically target educational programs, increase recreation opportunity, and restore streams with local support. 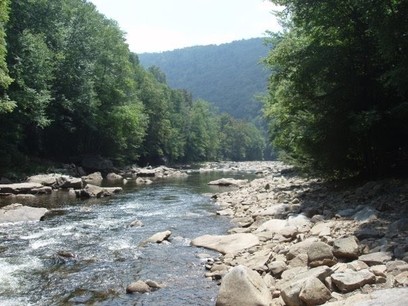 Abstract: Changes in watershed land-use/land cover (LULC) can affect the amount and rate at which water and sediments are transported to streams altering flow patterns and channel dimensions. Previous research has emphasized the relationships between watershed LULC and ecological health with less attention on the physical characteristics of stream channels and flow dynamics. Changes in erosional and depositional processes and stream response to storm events can impact bank stability and the occurrence rates of downstream flooding. The distribution of riffles, pools, large woody debris, and streambed substrate, among other channel features, also has implications for the quality and diversity of in-stream and riparian habitat. Data collected for the Mid-Atlantic InStream Assessment (MAIA) conducted by the US Environmental Protection Agency (EPA) for more than two-hundred stream reaches were used to investigate the impact of both the type and extent of land-use/land cover in Mid-Atlantic watersheds on several aspects of channel morphology. 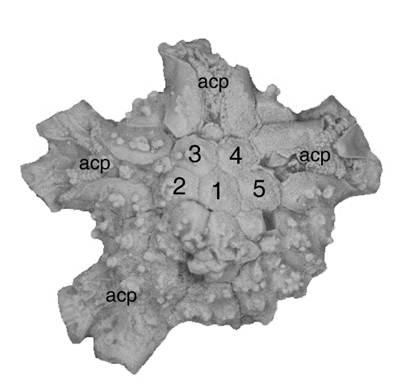 Eva Bragonje
MS student, Geology
Comparison of R and PAST: Which Works Best for Cladistics and Phylogenetic Trees

Abstract  Cladistics is the basis of all evolutionary trees that paleontologists make and use. Leaps and bounds have occurred in the field of cladistics, particularly in the software used to construct the phylogenetic trees. There are a variety of programs that can be used to construct evolutionary trees, the three main ones are PAUP, PAST and R. PAUP, Phylogenetic Analysis Using Parsimony, is a software package developed solely for the use of cladistic analysis. PAST, Paleontological Statistics, is a statistics package that can be used to make phylogenetic trees. R is a statistical program that has packages designed for use in cladistic analysis. By comparing the trees produced by all three of the programs, I will find out which works best for different situations. 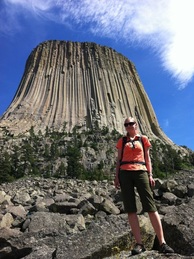 Abstract:  The data to be analyzed was collected by Michon Mulder and reported in her thesis (Mulder, 2012).  The purpose of her study was to determine baseline geochemical characteristics for groundwaters in overlying formations above the Marcellus Formation for future use in determining the presence of frac flowback waters in those aquifers.  A total of 41 groundwater samples from 11 different aquifer formations in the north-central West Virginia area were collected and analyzed for major cations and anions, dissolved gas concentrations of methane, oxygen and hydrogen isotopic compositions of water, carbon isotopic compositions of dissolved inorganic carbon, sulfur and oxygen isotope compositions of dissolved sulfate, and carbon and hydrogen isotope compositions of dissolved methane.  For this class project, R will be used to test for normality, determine correlation, and graphically represent the data
Patrick Eisenhauer
MS student, Forestry
Effects of Landcover on Baseflows in southern West Virginia 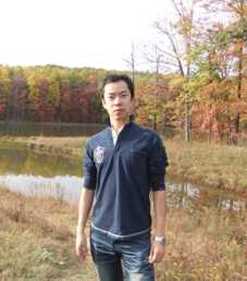 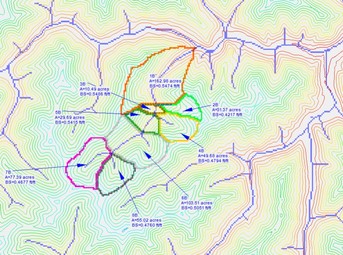 Abstract: Mountaintop removal mining (MTRM) has been used in southern West Virginia and eastern Kentucky since the 1960s with increasingly stringent regulation pertaining to the water quality of the affected watershed during the mining process and subsequent reclamation. The MTRM process generates excess spoil which is typically moved into nearby valleys and creates what is known as valley fills. These fills are constructed according to strict design criteria and have seen widespread use; however the design is prone to erosion and often requires maintenance long after mining has ended.This has led to the introduction of alternative designs intended to reduce the impacts of erosion. Geomorphic landform design (GMLD) has risen as a promising reclamation technique and this project will investigate the most important design aspects of GMLD with respect to total runoff. The statistical analysis package R will be used to test for correlation between watershed properties and overall runoff to determine which properties have the greatest impact upon overall runoff throughout the watershed.
Powered by